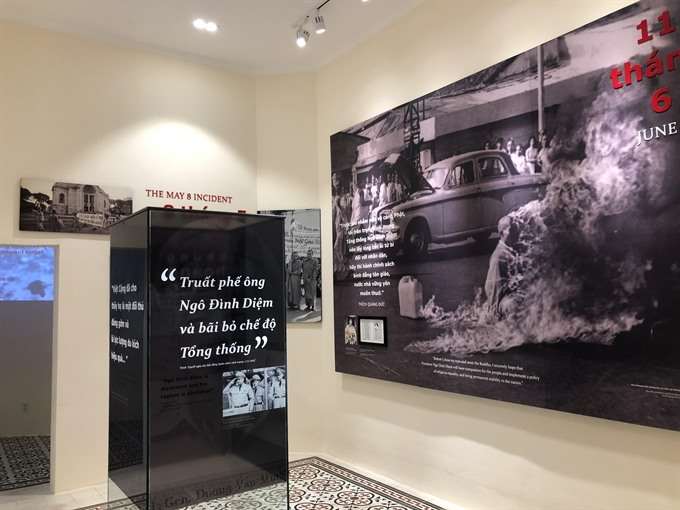 Viet Nam NewsVisitors to HCM City are well aware of the 20th century history of Independence Palace, now one of the city’s most popular tourist destinations. But most don’t know about its origins as Norodom Palace during French colonialism in the 1860s, and the dramatic events the site witnessed before the Viet Nam People’s Army tanks famously crashed through its gates in 1975. A new exhibition seeks to introduce visitors to a richer, more detailed history of Independence Palace. An Phương reports

Located in the heart of Sài Gòn (now Ho Chi Minh City), Independence Palace is one of the top landmarks for local and foreign tourists. With its distinctive and modish mid-century architecture, its rambling tree-filled grounds and its imposing gates, immortalised in world history when the Viet Nam People’s Army tanks crashed through in 1975 to reunify the country, the palace is an icon of the city.

Historically significant as it is, most people recognise it by the name Independence Palace. But long before it acquired this name, it had a different one, reflecting a history that has been largely forgotten. One of the latest exhibitions in town will shed light on Norodom Palace and how it was later replaced by Independence Palace.

The exhibition, called “From Norodom Palace to Independence Palace 1868–1966”, has opened to the public.

About 800 photos, documents and artefacts on the turbulent history of Independence Palace, curated by both Vietnamese and international experts, are being showcased.

The exhibition hall is housed in a two-story French house located within the grounds of the iconic landmark.

While the first floor has information on the birth of Norodom Palace, the second floor is dedicated to Sài Gòn life under French rule, the establishment and fall of the Ngô Đình Diệm administration, and the construction of the Independence Palace.

“There are specific topics under each theme, making the exhibition easy to navigate,” Quang Nam, 26, told Việt Nam News. “I’ve been to numerous historical exhibitions in town, yet this is by far one of the most comprehensive ones. I’m impressed!”

“I love this exhibition because it is located within this famous site which has seen French colonisation, Japanese occupation, and two successive wars of independence against the French and Americans,” he added. “Centuries of political conflicts and turmoil occurred here.”

A number of valuable documents in the exhibition are from collections of international historians or from archive centres in France and the US, according to news website VnExpress.

“We want to provide viewers with an interpretation of history, not just a recreation,” Edward Miller, event organiser and author of Misalliance: Ngô Đình Diệm, the United States, and the Fate of South Việt Nam, told VnExpress.

“You must understand history in its particular context, not in isolation and separate time periods,” he added.

In addition to significant historic events, photos of the lives and stories of individuals that helped develop Sài Gòn in the late 19th and early 20th centuries are highlighted.

Some of the familiar faces include Nguyễn An Ninh, Đỗ Hữu Phong, Trương Văn Bền, Sương Nguyệt Anh and Phan Châu Trinh, among others.

The exhibition also touches on battles between Ngô Đình Diệm and his rivals, and the self-immolation of Buddhist monk Thích Quảng Đức who protested the persecution of Buddhists under Diệm’s regime.

“Photos of this tragic event are on display, together with Thích Quảng Đức’s quote, ‘Before I close my eyes and meet the Buddha, I sincerely hope that President Ngô Đình Diệm will have compassion for the people and implement a policy of religious equality, and bring permanent stability to the nation.’ This really struck me!” Nam said.

“The exhibition is well-rounded in the sense that it doesn’t solely display facts on the palace but gives specific background information that shaped the course of our history. I’ve been here twice, and each time it brings different feelings,” he added.

Unlike other exhibitions in HCM City, touchscreens are installed at the venue to encourage visitor interaction.

Norodom Palace, built in a neo-Baroque style in 1868 by French architect Achille-Antoine Hermitte, served as the French government’s headquarters in Sài Gòn between 1887 and 1945.

On March 9, 1945, Japanese Imperial troops usurped France and conquered Indochina. The palace remained under the Japanese administration until September, when French troops returned to the south of Việt Nam and took back possession of the palace.

In 1954, France left Việt Nam, following the defeat at the battle of Điện Biên Phủ and the signing of the Geneva Accords.

The palace was then handed over to then-Prime Minister Diệm, who in 1955 overthrew Bảo Đại, the last emperor of Việt Nam, and became president of the Republic of Việt Nam.

Part of  the palace was destroyed on February 27, 1962 when it was bombed by two A-1 Skyraider aircraft in an attempt to assassinate  President Diệm.

Vietnamese architect Ngô Viết Thụ, the winner of the 1955 Grand Prix de Rome, was ordered to build a new one.

Construction of the new palace began on July 1, 1962 and was completed in 1966, three years after Diệm was assassinated along with his younger brother, Ngô Đình Nhu, in a coup d’état.

According to experts, a central feature of Thụ’s design was the “harmonious combination of modern European architectural elements with traditional Asian architecture”.

In fact, Thụ took inspiration from his knowledge of symbolic concepts derived from Eastern philosophy. The building’s overall structural plan is a rendering of the ancient ideogram jí, which means “good fortune”.

The new palace has an airy and open atmosphere.

Independence Palace was a presidential residence for presidents Nguyễn Văn Thiệu, Trần Văn Hương and Dương Văn Minh, and it served as the headquarters of the Sai Gon administration until April 30, 1975.

On that date, a T-54 tank from north Việt Nam stormed the palace gates, marking the end of the Việt Nam War and the start of national reunification.

The “From Norodom Palace to Independence Palace 1868–1966” exhibition will be open for three years. – VNS